The Descendants of Adam and the Secrets of the Zodiac: Aries

The Sons of Jacob and Sacred Astrology: Gad (Aries)

Gad, a troop will overcome him:
But he shall overcome at the last.
AGad will be attacked by
a band of raiders
But he will attack them at their heels
Jacob

At the birth of Gad, Leah said,

Blessed is he who enlarges Gad:
Gad lives there like a lion,
And tears the arm
with the crown of the head.
And he provided the first part for himself, because there in the portion of the lawgiver he was seated; and he came with the heads of the people,
he executed the justice of the Lord,
and his judgements with Israel.
He chose the best land for himself;
The leaders portion was kept for him.
When the heads of the people assembled,
He carried out the Lord's
righteous will,
And his judgements
concerning Israel.
Moses

It is with joy and glee that I begin to tackle and prove that Gad was allotted to Aries.

Who has not heard of the Gadfly?

Gad signifies, a spike, or prick, later taken as prod, spear or rod for goading cattle.

The Gadfly, sometimes called the bomb fly, is in it adult stage, the most stupid insect you can come across. How it hits its intended target is bafflement to me, they simple smash head first into almost anything and everything.

But more importantly they are commonly called March flies, for this is the month that they seek out their victims and lay their eggs on them. They were a serious pest in ancient Egypt: and Moses was an Egyptian.

And what is more, what do young men and women do in spring, but lose their senses and gad about

go around in search of pleasure

and a constantly annoying person may often be referred to as a Gadfly.

But let us not forget that Aries, the Ram sits on the bull of Taurus's back above his tail, and the Gadfly likes to lay its eggs on the cattle's heels.

'And tears the arm with the crown of his head' what better way can you describe the actions of an angry ram, who butts and fights with his head.

Gad will be attacked by a troop, band of raiders, but he will attack them at their heels.

Now the fun and easy part over, which would be enough for the wise, let us consider what Moses said of Gad.

blessed be he who enlarges Gad (his land-territory-range?)

This is no difference between Noah's cursing of Canaan; in which Noah says, AMay God extend the territory of Japheth; may Japheth live in the tents of Shem, or, may God allow that those things that began to grow in Spring (Aries) be allowed to continue to grow in Summer- Shem, and what Jacob states.

Leo, the lion is the symbol of the annual Sun, and because Gad is allowed to live in both domains; spring and Summer, he can easily be said to live like the lion of summer. Or, if you still are baffled one might better say, let Gad live under the protection and watchful eye of summer, that is Leo.

Now Gad is the name given to the sun in March, but the old year's sun, dies in Capricorn at the winter solstice, thus one could say that it is attacked, but it immediately begins to rise again, and fights the constellations, with its ramming horns, to regain its high place when it reaches the spring Equinox, in late march.

And Moses says of Gad,

and he provided the first part for himself, because there in the portion of the lawgiver he was seated.

Certainly, Cepheus, the constellation of the king of Ethiopia sits in Aries, and a recent king of Ethiopia was known as the 'Lion of Judah', or Leo, as it should be. But Aries is the beginning, thus father of Spring, therefore like Japheth, he does indeed provide the first portion-3 months by his own means, he is then allowed to live on in the tents-months of Summer, Shem.

The heads of the people, are merely the signs, whom the people venerated as gods, and justice was the renewal of the growing season, and he did this with Israel, who was also Jacob, who was allotted to Taurus, and as the RAM sits upon the back of Taurus he could do little else but involve him.

Both the ancient Sumerians and the Babylonians knew the sign of Aries as the 'Hired Man', but it is thought that the hired man was original a vegetation god like Osiris of Egypt, and as such was a kind of shepherd, for he fed [was the food] the flocks, as well as being a feeder and king of people.

Now Abram, was allotted to the sign of Aries, and his life story fits the bill almost to perfection. After Abram's father had died the lord appeared to Abram and said.

Now Abram was certainly a shepherd but hardly a hired man, but let us remind ourselves what Jacob and Moses said.

[J] Gad, will be attacked by a band of raiders, but he will attack them at their heels.
[M] Blessed is he who enlarges his domain. Gad lives like a lion, and tears the arm with the crown od his head.

We are told that Abram goes to stay in Egypt because there was famine where he was. And while he is in Egypt Pharaoh takes a fancy to Abram's wife Sarai; whom Abram had pretended was his sister, because he feared the Egyptians would kill him, and take her anyway if he told them she was his wife. So, Pharaoh took Sarai, and showered Abram with presents of Livestock and servants. But the Lord put a curse on the Egyptian and his household; and when Pharaoh realized he had been tricked, he sent her back to Abram and told them to leave. So, Abram became a wealthy man.

Now Abram had taken his brother Lot and his family and flocks with him; but the land could not support their combined flocks. And so, they parted company and Abram went to live in Canaan. But Lot went and pitched his tents near Sodom.

Then a great war broke out which ended with the victorious kings sacking a looting Sodom and Gomorrah, they also carried off Lot, his family and all he owned. But when Abram found out he rounded up his men and attacked the raiders pursuing them far, and recovered Lot and all he owned and more.

Although there is a lot more to Abram's story, we have delved enough into it for our present needs. There should be no doubt in your mind, that Abram was allotted to Aries, at least up until the point when his name is changed to Abraham. 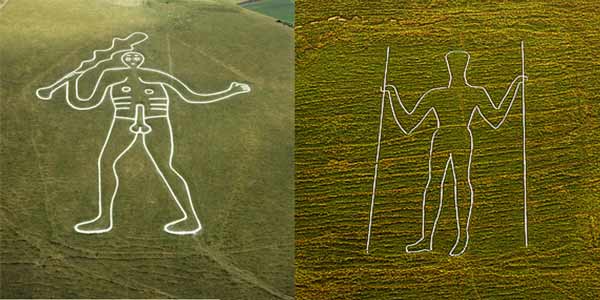 Amongst the disciples, Andrew was allotted to Aries. Andrew like his brother Peter was a fisherman, and of the fish of Pisces we find that one is close to Aquarius, the other near the Rams head, thus they are bonded as brothers as not only do the fish connect them, the ram's feet are near the point where the two rivers of Pisces join and enter the back of the neck of Cetus, but also by the chains that bound Andromeda. The translators render the meaning of Andrew, as 'a strong stout man'. In several Egyptian planispheres I find Aries depicted as a strong stout man holding a stick or staff in each hand. This same figure is depicted in England, as the 'long man of Wilmington'; it is one of several chalk figures to be found in England, the most famous of which is a depiction of Orion, called the Cerne Giant.

On a lighter side, I always find myself feeling Andrew is a very Scottish name, and as Aries is indicative of a war like nature, I may not be far wrong, LOL.

Gad, was no man but the zodiac sign of Aries.

Do not let yourselves become sheep, and follow the senseless herd, for men who carry themselves like sheep, are thoroughly fleeced; be a ram and understand.

Astrology: The Descendants of Adam